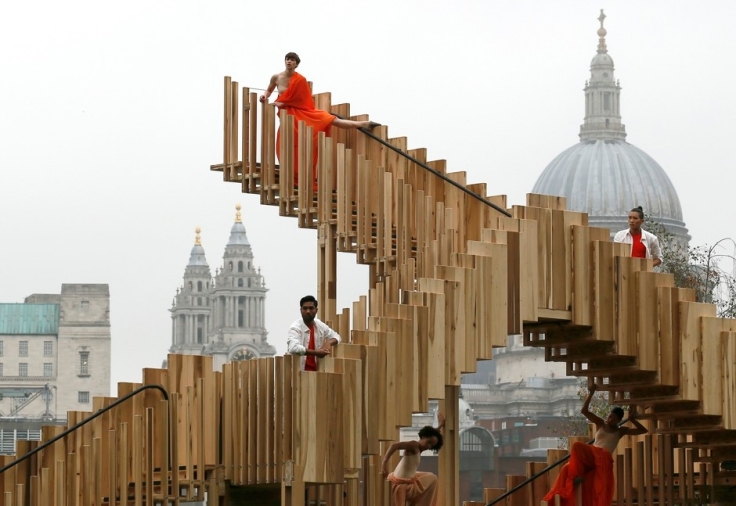 Creative service industries (CSI)’s agglomeration rapidly decays with distance. This fact suggests that for CSI higher expected returns in terms of productivity arise from being agglomerated at the city centre. However, previous studies have not discussed how market potential effects could mitigate the agglomeration advantages for CSI. In this regard, I estimate the effects of having more near CSI firms on productivity in Barcelona controlling for specific neighbouring characteristics as demand factors and cultural amenities.

In an increasingly global world, local governments have attempted to enhance the agglomeration of the most creative firms and highly-skilled workers in their cities to improve their regional competitiveness. This is the case of Barcelona that accounts for more than 7,000 firms and more than 100,000 employed in the CSI, which turns the city into one of the most relevant hubs for CIs in Europe. Clearly, the increasing attraction to Barcelona may have many implications for its economy and social conditions. For this reason, identifying the extent of agglomeration economies for the CSI in Barcelona is important both for firms’ location decisions and for policies focusing on urban regeneration, attraction of skilled workers and generation of creative and innovative environments.

Creative industries are characterised by a project-based, contractual, and time-dependent working nature requiring constant explicit and tacit contact within formal and informal networks. For this reason, advantages to being agglomerated in the same areas exist for workers employed in CSI. In this regard, geographical proximity can certainly facilitate the exchange of knowledge between different agents working in the same area. For the same reason, agglomeration economies for CSI can also be highly sensitive to distance-decay. Thus, a positive effect and rapid distance decay for the agglomeration economies of CSI than for that of other industries is expected, and these results may depend on the dominant knowledge base (symbolic, synthetic or analytical) of each creative sector. Nevertheless, the effect of the spatial extent of agglomeration economies on the productivity of creative firms within urban areas has not yet been analysed in the existing literature. This lack of evidence on this issue hinders the understanding of urban creative-led policies and the robust trend of CSI to agglomerate in city centres. Indeed, previous studies have also neglected the fact that market potential effects could mitigate the agglomeration advantages for CSI and that they may explain the tendency of CSI to coagglomerate whichever city they are located in.

Against this background, this paper analyses the spatial extent of agglomeration economies for the CSI in Barcelona and its relationship with firm performance. In particular, it controls for market potential effects in order to identify the actual role of the specific characteristics (i.e., networking opportunities, cultural amenities, place-image) that traditionally explain the spatial concentration of CSI in the city centre. To do this, I have estimated the effects on productivity of intra-industry (among CSI) and inter-industry (non-CSI) agglomeration in rings around firms in Barcelona. Agglomeration measures and proximity to urban amenities are computed by using Geographical Information Systems (GIS) techniques. For each creative firm and year, I have created a series of firm ring variables counting the number of neighbouring firms or amenities located within each distance band defined around the reference firm (see Figure 1). With this fine level of geographic detail, I can infer the actual benefits of close interactions among CSI. 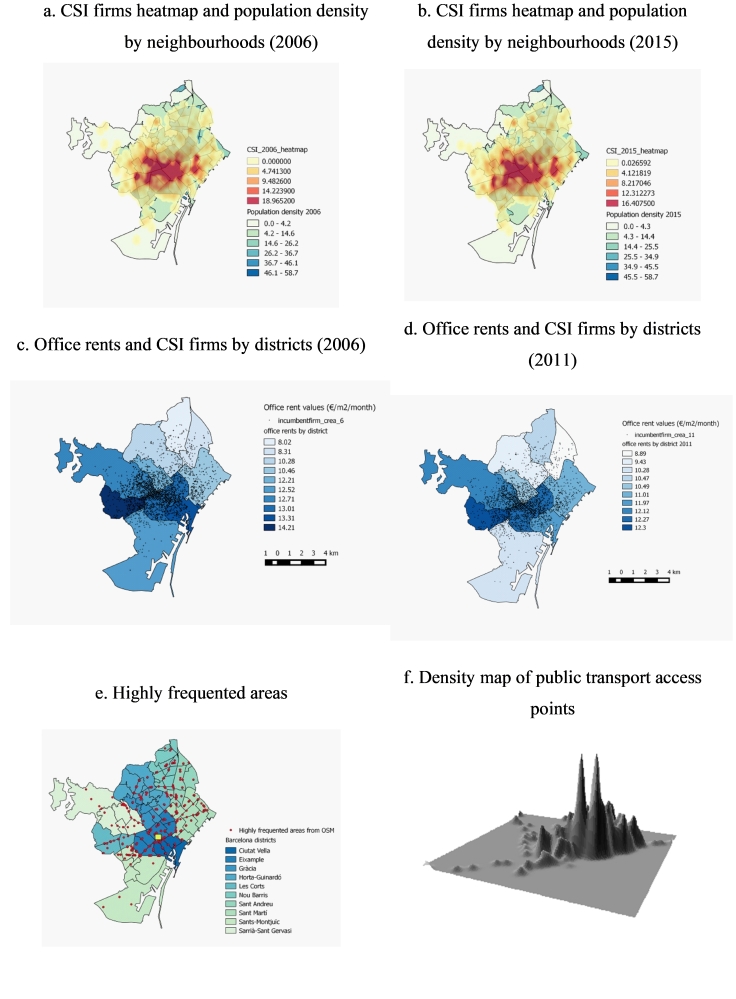 Source: Own elaboration with OSM, Barcelona Council and SABI’s data.

Figure 2 depicts the spatial distribution of CSI firms, the population density of the neighbourhoods, office rents prices by districts and main public transport access density points for the city of Barcelona. All of them confirm the fact that CSI locate largely where potential demand is highest and, therefore, agglomeration effects may be mitigated by market potential effects. Moreover, this tendency of CSI to locate in the city centre is quite persistent from 2006 to 2015.

Using micro-geographic data from the Mercantile Register (SABI) for firms between 2006 and 2015, I estimate the effect of intra-industry and inter-industry agglomeration in rings around location on productivity in Barcelona. The main results are: (1) for CSI, at a micro-spatial level, localisation economies are important within the first 250 metres; (2) for non-CSI having employees in the CSI in close proximity (250-500 metres) enhance their productivity; (3) for symbolic-based CSI firms localisation economies – mainly understood as networking and/or knowledge externalities – have positive effects on TFP at shorter distances (less than 500 metres), while for the two other knowledge-based CSI (i.e., synthetic and analytical) localisation economies seem to be less important; and (4) market potential does not offset localisation economies for CSI. These results strongly suggest the importance of agglomeration externalities in CSI, which are strongly concentrated in the largest cities.

These results do have implications for policy. Bearing in mind that close spatial proximity between CSI brings productivity gains, urban policies aiming to attract CSI should promote short-distance clusters. However, the results have shown that proximity to urban amenities is less important for the productivity of CSI than localisation economies and proximity to co-working spaces. Consequently, public spending on the provision of urban amenities, justified on the basis of their potential to enhance local competitiveness and the image of a city may be wasted if it does not increase human scale interaction and networking possibilities. In spite of that, cultural amenities may have an important indirect effect on local economic performance.

An installation created for the London Design Festival in 2013. Stefan Wermuth / Reuters, https://www.citylab.com/life/2016/04/how-do-the-worlds-top-creative-economies-stack-up/479022/